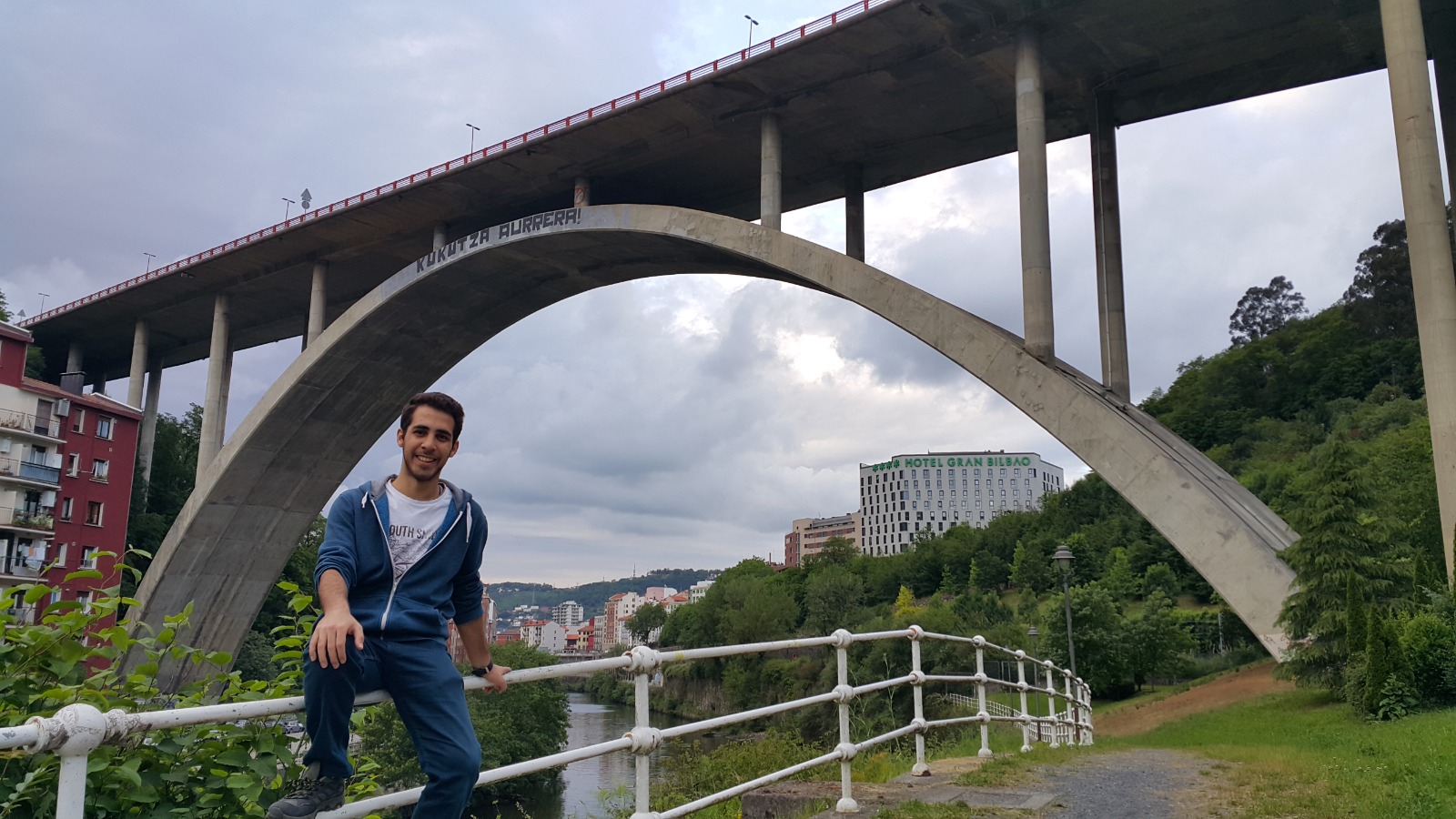 #firstly, can we get to know you?

Hello there, I am Alperen UĞURLUOĞLU. I am 23 years old, a 4th year student at Yıldırım Beyazıt University, Department of Electrical and Electronics Engineering. I participated in the Erasmus program in the second semester of the 2nd grade.

#how did you participate on erasmus program?

I went to Bilbao, Spain with the Erasmus program. Here I took courses at Pais Vasco University from two different departments named Electronics-Communication and Energy Distribution. I did Erasmus for a period of 5 months. This 5-month period covers the period between January 14, 2019 and June 14, 2019.

#how did you decide to apply for erasmus mobility?

The idea of Erasmus stuck in my mind before I even registered at the university. One of the best opportunities of the university was to offer abroad experience. For this reason, I thought I should go if I could. The idea that it contains many unknown adventures and seeing different countries and people got under my skin.

In addition, I thought that Erasmus would be particularly helpful to me because I have an introverted personality. With the logic that swimming is best learned in the ocean, I made my application when I found the opportunity.

#what were the difficulties during the application phase?

I can say without hesitation that the preparation of all the documents I have to handle in Turkey is very difficult, troublesome, erroneous and last minute.

After my application was accepted, my letter of acceptance came from a university that I did not even write on the list. My letter of acceptance was sent to another university by mistake. It was fixed even though it was at the last minute. Because of this, all the remaining documents have been delayed. Later, my course selection coincided with the final week. I was able to prepare the document somehow, but my lecture grades dropped.

Since there is a whole world of documents required for a visa, I spent much time thinking if I should stop going at this point. But in the end, I did not give up and managed to collect all the documents. Then I applied for a visa and only two days before my departure, I got my visa and after taking my final exam, I got on the plane and flew to Bilbao, Spain.

#how was the process of choosing the place where you will go abroad?

My country selection criteria consisted of 3 main criteria. The first was that I could survive economically in the country where my university is located. (Poland is the best in this regard, by the way, I chose Spain for other reasons.). The second was the course selection compatibility between my university and the hosting university. Third, the city where I was located had a sea or ocean shore.

Considering these criteria, I chose Spain and Poland, the two most suitable cities for lectures and economic livelihoods. I made 3 choices. These were in turn Spain / Bilbao, Spain / Madrid and Poland / Rzeszow. It turned out to be my first choice

#how was the lecture selection process?

I tried to choose the lectures that would be equivalent in the department. I found and selected the courses that matched in terms of content. My lectures consisted entirely of English and compulsory courses. Apart from these courses, I tried to choose the Spanish course in particular. Frankly, it would not be possible without going abroad and developing a new language.

#considering your department, what advice can you give to the people who will participate in the erasmus program in the future?

Usually the first week and the last week are only difficult. Before you go, memorize the map of the city and transportation facilities if necessary, these are important. I recommend that you learn how to find the sim-card, the photo of the person and meeting point if you have participated in the ESN Buddy program, the location of your accommodation and the photos of the hosts.

I especially recommend that you make your travel plans and your planning from the first week you go. Later, it gets very expensive and you will not be able to go.

Don't be too sad for the last week ya. You really get sad at the time of leaving.

#it is seen that you had hard times for leaving Bilbao. what do you want to say about post-erasmus depression? how was your experience, was it close to that? :)

After I came to Turkey, I can’t deny that I missed Bilbao. After all, I got used to there. However, I realised something different; I was really impressed by the lifestyle of the Spanish people. For example, when I went to the beaches, some people were reading a book, sketching something on their sketchbook. Also, there were a lot of people who were dealing with sports in contrast with the Turkish people. After I came to Turkey, I was reading many books, doing exercises at home and I sketched a picture from San Sebastian. Bilbao gained me some good habits actually.

The city of Bilbao is really a calm city. I can say that there is no one when you compare it to Ankara. The city architecture is especially magnificent. You want to get lost in the streets after a while. The locals are really nice people. They are helpful and smiling. It is very easy to find friends if you want. While talking with a friend at school, I had the opportunity to get to know Bilbao very closely from an economic point of view. Bilbao is actually a port city. Before, it was a city whose walls were black due to factories and coal mines. However, after the reactions of the people, factories were moved and an economic system was established mostly in touristic areas. House prices are affordable compared to other cities. Favorable for food and drink, transportation and personal expenses.

#can you evaluate erasmus experience in Spain?

Spain is a magnificent city with a different culture in each region. In addition to the culture left by the Andalusians in the south, it is a masterpiece country, especially in terms of architecture, with its unique culture on the north. I was very happy to be in Bilbao. It contained most of the features I was looking for in a city. But if I had a choice, I would like to be in Barcelona. It deserves the title of being one of the most beautiful cities in the world.

#how was the erasmus student profile in your context?

I met students from many countries from America to Korea. There were mostly students from Korea and China. Afterwards, more students came from Czechoslovakia and Germany. Based on the number of people in the group that came to our school, I can say that there were around 200-300 students.

#how was your social environment during your stay?

I had 3 friends among local students. I had around 10 different friends among Erasmus students. Especially, we had a lot of conversation with my housemates. One was from the Czech, one from the German and the other from Ukraine. When I am travelling, I had two friends, one Turkish and one Ukrainian with me most of the time. We are still in contact with some of them. But that's the case if you're an introverted person. I have friends in the cafilla with groups of 30-40 people that literally travelled every place in the Europe. It was very surprising for me.

#people with erasmus experience often mention that Spanish people always spend time as a group. Does this situation change in Spain when you are erasmus student among the Spanish people? what can you say about this? :)

Because they were already friends, they were more sincere to each other. I can’t judge this. However, they were very sincere with me, as well. When I wanted to join a group, they accepted me.

#what was the hardest part of living in a foreign country?

At first the adjusting process was very difficult for me because you are alone. Thats why, I couldn’t catch up with the lectures sufficiently and I was a little late to prepare a trip plan. So, I missed some trip opportunities.

#what was the best part of living in a foreign country?

It offers a brand new life opportunity. You are almost making a life from scratch. This really feels good. You meet with a culture and people you've never seen before. You discover brand new places. You are especially evolving personally. Apart from these, although you paid the fee in Euros, almost everything was much cheaper than in Turkey. It is true that I eat kilo of chocolate in a week.

#what did you do during this process that you haven't done before?

It was my first experience abroad. I had never planned a trip alone before. I learned a new language. In fact, I can still help a Spanish tourist, when you learn the basics of the language properly, everything falls into place. I also cooked.

#we know this question is quite difficult to answer. what kind of contributions would you say this experience have made for you? :)

It brought me a new personality, a new language, new recipes, a wonderful view and memories that remained in my mind.

A wide variety of street art is exhibited in Barcelona. The most traditional of these was flamenco. While I was visiting Parque Güell, I came across one of them. What I cannot forget is that local tourists could accompany the dance. The artist could dance well with anyone he invited to the dance.

#was the erasmus funding enough? did you spend extra money?

I received a 2500 Euro Grant and it was exactly enough for me.

#is there any information that is useful for you and do you have any suggestions?

Register the subscription of all airlines. My Ukrainian friend bought a round trip ticket to 3 different cities for one Euro each. Keep in close contact with ESN networks.

#which transportation-communication companies did you use?

My phone line was from a company called llamada. I flew between Turkey and Spain, especially with an airline company named Turkish Airlines. Ryanair Airline was the most affordable for my trips in Spain. Apart from that, I traveled on the Spanish train line.

#do you have any information about the ESN in your host country? what do you think when you compare it with your own unit?

If you are going to participate in Erasmus, the biggest guides for you outside of schools are the members of this group. She helped me a lot in finding a house. It offers at least one trip and entertainment opportunity every week. When you go first, they give you an ESN kit for 10 Euros if you want, which can meet your many needs. Since they set up a group on WP, you can meet people you don't know before and do joint activities.

#finally, do you have any messages you want to convey to those who read this interview and to the ESN AYBU family? :)

I hope I have contributed to my friends who read this interview. I would like to thank the ESN AYBÜ family for their request to listening my humble experience.